Introduction to “The Simpsons: 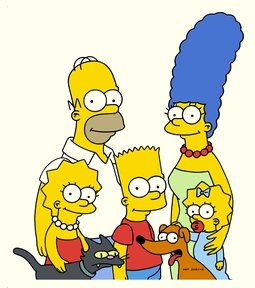 The Simpsons is the ultimate (if very unorthodox) nuclear family. Homer, the lovable dufus father, stumbles apathetic ally through his family life and work at the local nuclear power plant. Marge, the overbearing but responsible mother, Bart, the 4th grade underachiever and nemesis to Springfield elementary’s principal, Lisa, the brainy and responsible 8 year old, and Maggie, the oft-forgotten baby, round out the family. Based on a series of small cartoon sketches from the Tracy Ullman show, the Simpsons enjoy many wacky exploits in their hometown and beyond. Other characters include an incompetent lawyer, the tyrranical nuclear power plant owner, the too-perfect neighbors (the Flanders) of the Simpsons, and the less than perfect “Klown”, Krusty. Colorful characters and situations abound.

During Christmas, a lawyer threatens the Simpsons for singing copyrighted carols, so Homer decides to write one of his own. He ends up penning a Flanders bashing song instead, which, with a little help from David Byrne, becomes such a huge hit that the family decides to escape all the publicity – by heading for the Lazy I Ranch (run by the Rich Texan).

Lisa quickly falls in love with young cowhand, Luke (Jonathan Taylor Thomas), but then mistakes the cowhand’s sister as a rival, sending her into the middle of a raging river unleashed by Homer’s war with the local beaver population, over Native American tribal lands. Also Guest Starring Director Jonathan Demme as Himself.

The Cast and Crew